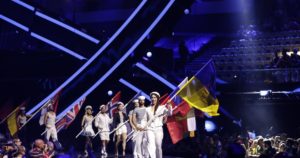 The evening was hosted by Portuguese quadruplets, Daniela, Filomena, Silvia and Catarina. 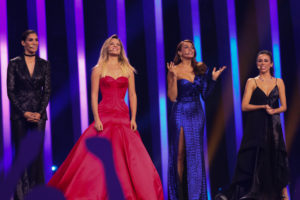 Thankfully, there was not much talk and we jumped straight into the first contestant.

What a start to Eurovision! Melovin from the Ukraine had it all – trapped in a coffin, dressed in a black morning coat (blown away by wind machines) and flames licking at his feet – it deserved better than 17th place. 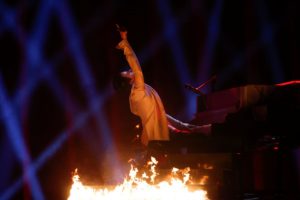 Amaia and Alfred from Spain duetted a benign love song accompanied by smiles and not much else. The lack of any choreography, coffins or fire cost them dearly – 23rd place.

Change of pace with Slovenia’s girl power. Lea and her friends were stomping up and down the stage under strobe lighting – the crowd was loving it, but not the voters: 22nd. The first whipping ponytails of the evening!

An exhausted Ieva from Lithuania’s had to sit down on stage amongst her floppy pink dress. Finally, she scrambled up to walk up a set of stairs where she was joined by a young man (her husband?), who had no function at all – 12th place. 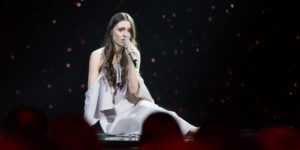 Cesar (Austria), dressed in a star trek uniform, was not distracted by the off-key backing singers, and delivered a solid upbeat performance, carried into 3rd place by the jury vote. 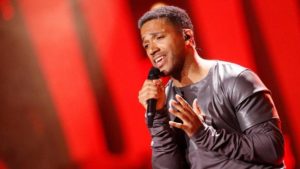 Estonia’s Queen of the Night, Elina pierced the evening with a soprano performance that could have shattered wine glasses (and ear drums). Her magnificent dress saved the performance – 8th place. 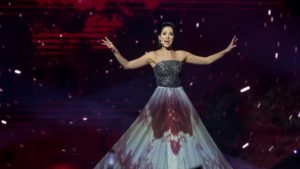 Norway’s Alexander Rybak could not bank on his previous Eurovision win in 2009: 15th place. 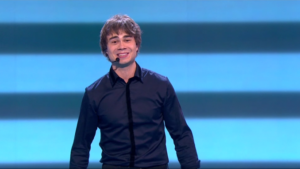 The host Portugal was up next, but Claudia’s harmony with her onstage friend was off-key and she was swiftly relegated to the last place. Best pink hair of the evening! 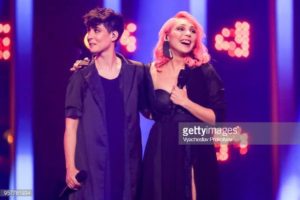 The UK’s performance was interrupted by some clown who rushed the stage and grabbed the microphone (Kanye?). An undeserved 24th, despite the excellent recovery from SuRie who belted out what remained of her song. Another wardrobe pick from the star trek set. 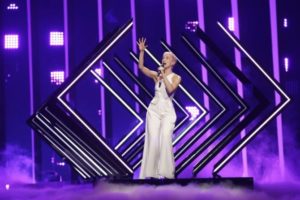 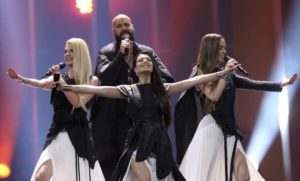 Michael from Germany was tugging the heartstrings of voters across Eurovision. Dressed in black with excellent curls, and even better visual effects – 4th place. 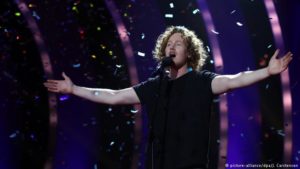 Albania was next with a rock band on stage and a flawless and energetic performance, despite the highly confusing wardrobe – Kiss meets the Klingons? 11th place! 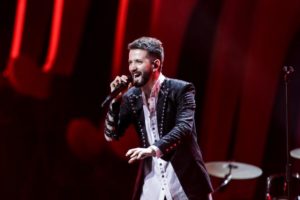 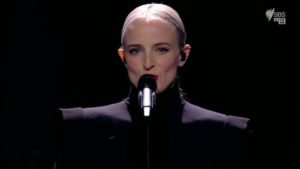 The Klingon empire (Denmark) was next – Ramsussen let their flowing beards do all the talking, conjuring up a snow storm on stage – 9th place. Best eye-liner of the evening. 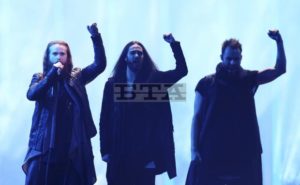 Australia’s very own, Jessica Mauboy gave it her best with a big song, some excellent hair whipping and wild dancing. The crowd love it, but no-one else…20th place. 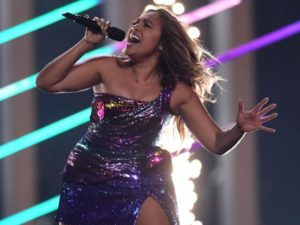 Finland’s Saara was pulling all leavers – unsuccessfully. Not sure about the NS style uniforms- 25th place!

Keeping the wailing to a minimum, Bulgaria’s Equinox, dressed as Vulcan high priests, delivered a funky anthem and were rewarded with a respectable 14th. 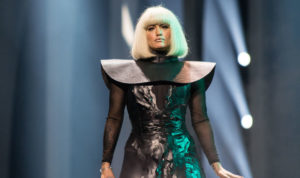 Sweden’s disco inferno was a welcome relief after Moldova. A flawless singing performance, albeit the promises of a ‘dance you off’ was not met. Still, a respectable 7th place.

At least Hungary’s AWS had a good time on stage, screaming their metal anthem only slightly out of tune. I still dozed off….21st place. 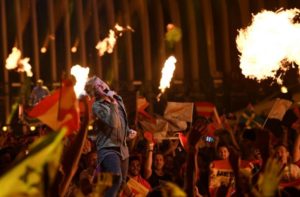 Israel’s Netta was operating the console of a Romulan warbird and delivered the best chicken song and dance of the evening – to the delight of the crowd and Eurovision – 1st place! Israel, here we come!

Another band arrived on stage –Netherland’s country & western Waylon. Or so it seemed -the guitars were fake and quickly discarded to make room for some very energetic dancing. This type of deception never goes far – 18th place. 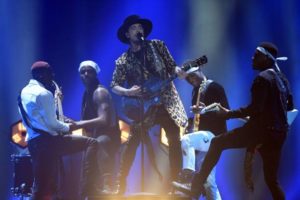 Ryan from Ireland was accompanied by a black piano, a street lantern and snow. But it was the two affectionate backing dancers that stole the show and catapulted an otherwise boring song into 16th place. 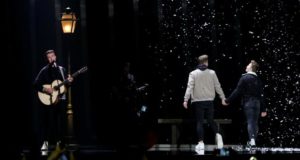 Wearing a spray-on suit, Eleni from Cyprus whips the crowd with excellent hair and dance moves, only narrowly escaping a wardrobe malfunction. Eurovision in its purest form – 2nd place! 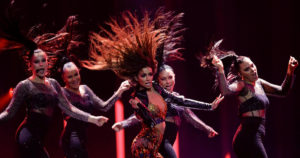 Italy closed the performances. I can’t quite remember, but someone did – 5th place. 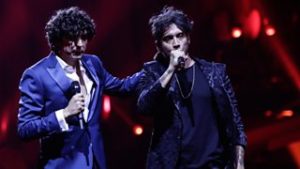 The jury votes were all over the place with douze points going to Austria, France, Germany, Sweden, Albania and Cyprus and Israel, changing the lead at almost every vote. The popular votes then rearranged the leaderboard dislodging Austria from the first place to make room for Israel and Cyprus.

In a nail-biting finish, Israel beat Cyprus by 100 points – Tel-Aviv here we come!

It is over, thankfully – I need a nap!